If Jeeves were here, I’d ask him if he liked the burnt sienna backsplash in his Butler’s Pantry… something tells me that his answer would be an enthusiastic “no ma’am.”

The “before” picture — check out those lovely tiles 😉

Once upon a time, this delightful Crayola color may have been a popular choice, but not anymore! So, we had to bid farewell to all those little orange tiles and give the butler’s pantry a well-deserved makeover.

First things first, I easily chipped away the tiles with a hammer and chisel because the adhesive had lost a lot of its strength over time. Unfortunately, the adhesive kept a very strong bond with the plaster wall between the upper cabinets and the counter top. I tried to chip away at it with every tool I could find, but finally had to resort to our orbital sander and heavy grit sandpaper. It was a dusty, tedious, goggle-fogging job, but I finally got it down to the smooth plaster underneath with only a little damage that required simple patching.

Close-up of the stubborn glue left behind.

I had to stop every few minutes to wipe out my goggles. Yuck!

Next, we discussed what to use for the new counter top that would complement and preserve the charm of the original cabinets. We landed on the idea of “up-cycling” some of the original ceiling joists we cut out to vault the ceilings in the family room and master bedroom. We took this idea to my dad, the forester and master craftsman, to request his expertise and ask for his help to bring the new counter top to life.

Naturally, he had an ever better idea! Our joists were certainly thick and sturdy enough to do the job, but they were made of pine. As mentioned in the floor refinishing post, pine does not stain well and our “vision” was of a darker, richer wood counter top, not raw pine. It just so happened that my father (the forester, master craftsman, AND wood hoarder 🙂 ) had a stash of beautiful walnut left over from when my parents built their kitchen island. Glory! It was just the thing. We are so fortunate that the Harpers were willing to part with such special materials and my dad created a handmade walnut counter top for our butler’s pantry by joining two large pieces together and lovingly applying coat after coat of tongue oil and polyurethane. 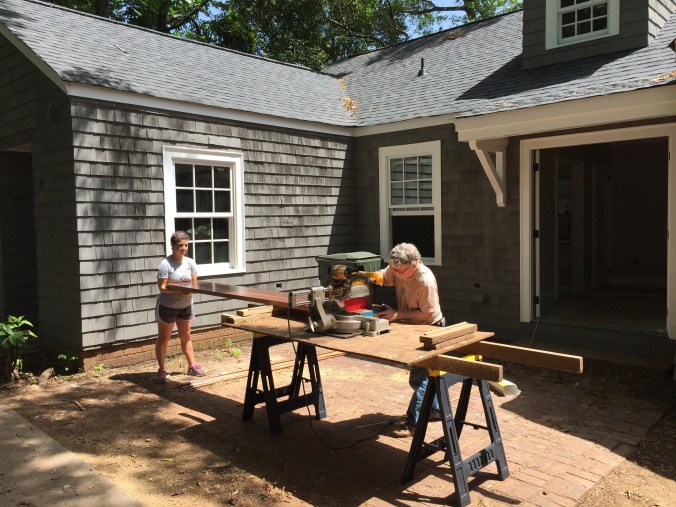 Cutting it down to size.

Daddy’s favorite cutting stance. I believe we have seen this move before 😉

Ready to install this beauty! 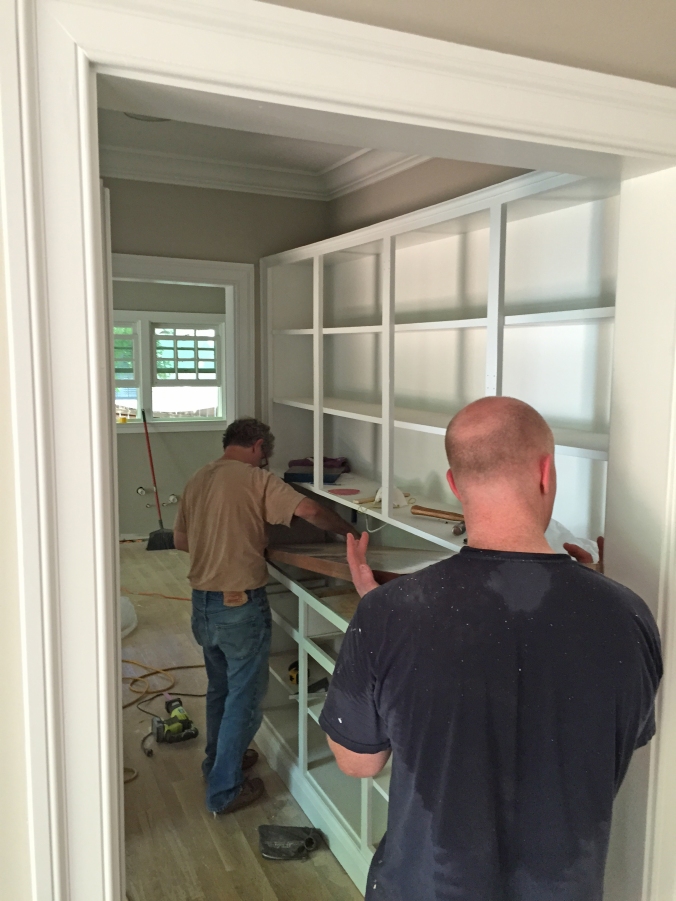 Wrangling it into place.

Fastening it from underneath, so we don’t mar the wood.

My guys admiring their work…

My dad also made a matching cove molding to give it the perfect finishing touch!

It came out better than I ever expected. In fact, it may just be my favorite part of our nest… 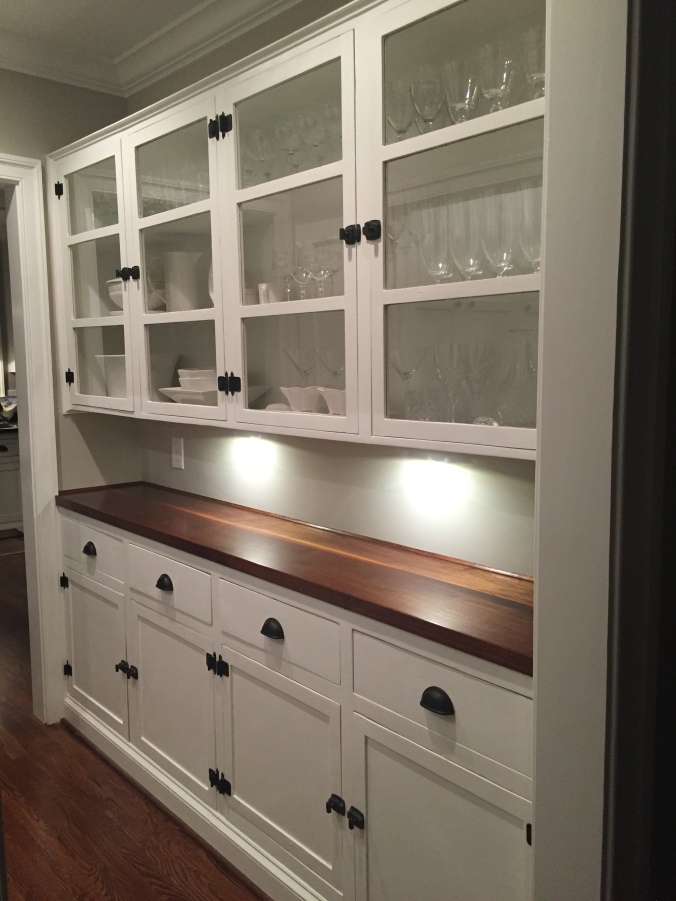 …and a very special message hidden on the underside. 😉

One little daffodil popped up to celebrate the start of a new season at The Nest! 🙂

Two weeks later, framing is complete. And it is GLORIOUS!

First on our list was fixing the weak links. Because of the age of our home and its state of disrepair, we had a few trouble spots to address where there were rotten or otherwise compromised studs and/or support joists. Many of these places were around windows that had begun to leak slowly over the years and underneath the super-heavy cast iron tubs in the bathrooms. Common theme: water. Don’t let it fool you; water can be the destroyer of worlds if you leave it unchecked! Thankfully, we had mostly superficial, ugly-but-not-serious damage. We only had two relatively small “surprises” where floor joists needed to be shored up from underneath the house…both cases in the bathrooms underneath three and five hundred pound tubs. (Can’t say I’m surprised that a few of those poor joists needed some reinforcements after carrying weight like that for 70+ years.)

A couple of nasty rotten spots caused by slow leaks.

Worst water damage of all… the wall in the great room slowly separated from the chimney around the fireplace, creating such serious water damage that the entire wall had to be rebuilt. (Luckily, this was once a garage that was closed-in to make a den, so the floor is concrete and was not compromised.)

Wowzer! It’s pretty clear where the water was coming in…

Okay, now on to the fun stuff…

You may remember from the Best Laid Plans post that we decided to make minimal structural changes to the floor plans, but these small tweaks bring pretty substantial rewards, making our house a lot more functional. So, now that framing is complete, here’s the bird’s eye view of our nest’s anatomy.

Notable tweaks: opening up the kitchen to the great room, creating a powder room within the office, splitting the butler’s pantry to make a laundry room, and reconfiguring the bedroom hallway to create a true foyer, more privacy and a large closet for the master suite.

Pretty good bones, am I right?

The most exciting part of this framing expedition – something you can’t see on a 2D blueprint – is that because of some unusable attic space and a little creative thinking, we were able to vault the ceiling of the great room…and, as a special surprise… our MASTER BEDROOM! Yay! Talk about a transformation…

You just have to see it for yourselves, y’all! Here goes: 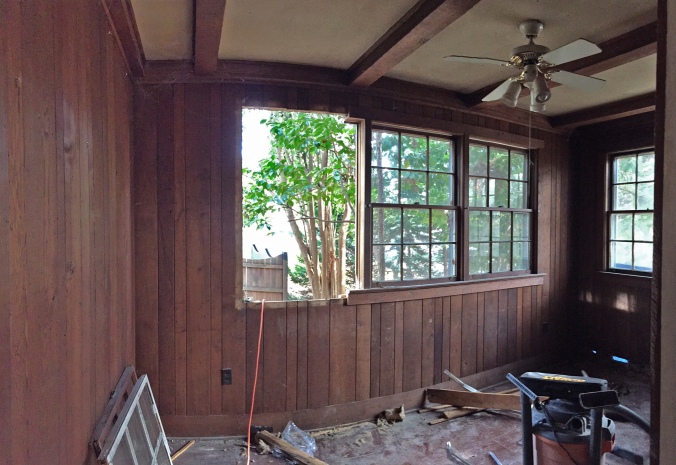 Prepping the office for the addition of the powder room…we are losing one window in here, but totally worth it! 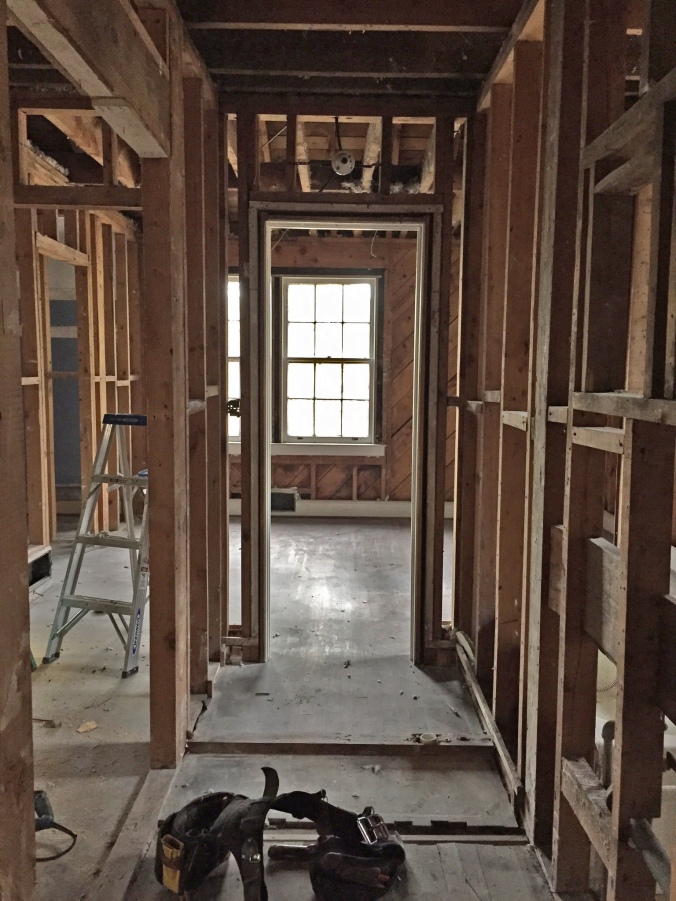 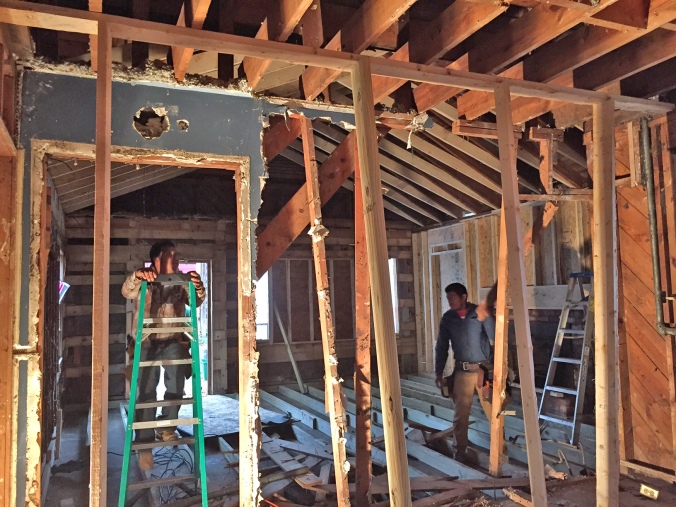 Putting in the LVL support beam before removing the kitchen wall.

New scissor joists are in the ceiling, so the old cross beams are coming out!

Ta-dah! Our new and improved kitchen space, now open to the great room with vaulted ceiling.

Great room view from the back door looking toward the kitchen.

Master bedroom with new vaulted ceiling!!!!! We love that the little round window in the peak is now visible from the inside, too.

Next steps in our Nest Building adventure:

Interior essentials
– Electrical
– Plumbing
– HVAC
…then we can close up the walls. Hooray!

If you’ve ever thought it was a good idea to glue linoleum tiles over beautiful hardwood floors, you may want to skip this post because you are officially on our naughty list!

Clearly the linoleum must go, so Matthew and I decided to test the waters and see what was lurking under those popular squares of a bygone era. Whaddyah know? There’s beautiful hardwood floor under there! In both the kitchen and the butler’s pantry, the previous owners had pasted over the original hardwoods… and it was no easy task to chisel our way down to the good stuff. Matthew and I spent the better part of two days chipping away at the tiles with scrapers and a rubber mallet, but it was worth it!! 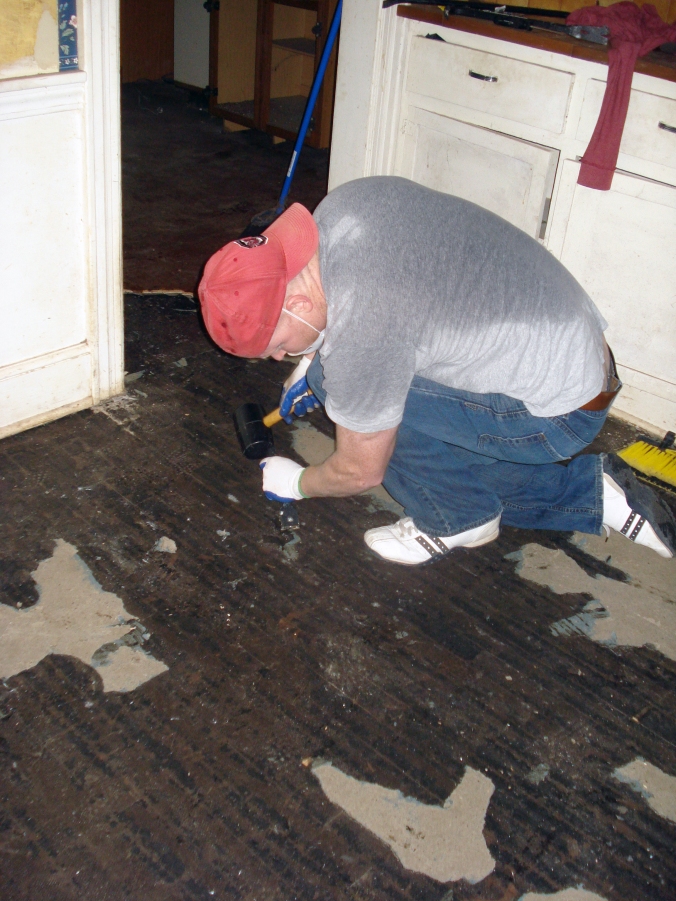 As we were scraping along, we wondered to ourselves, “what exactly is linoleum, anyway?” So, naturally, we Googled it. In case you’re wondering, too, here’s the scoop according to Wikipedia:

Funny thing – you’ll notice that the use of the word ‘linoleum’ grew exponentially in the late 1940s/early 1950s… back when our little nest was just a teenager. Maybe the linoleum was just an awkward phase. 😉

That’s right! Our studs are on full display, so try not to stare.

After our permit was approved, we slapped that baby up in the window and went to town with hammers, crowbars, and a lot of elbow grease. And, thankfully, we had a couple of volunteers, too! Matthew’s sisters, April and Rebecca rolled up their sleeves, donned dust masks and spent the entire day working with us on Saturday. Hours of hammering and one huge dust cloud later, we had exposed the bones of our little Nest!

Here’s a recap of our Demo Day:

The nastiest job of all… old carpet removal.

Then linoleum floor tiles had to be scraped up! 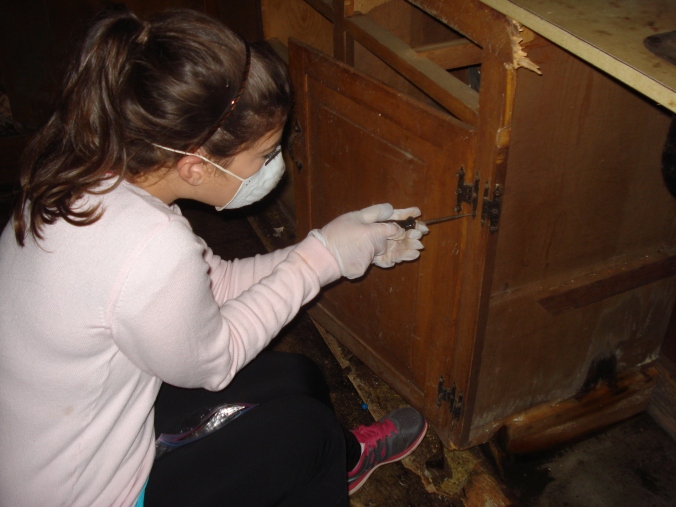 Saving the cabinet hardware before the hammers begin. 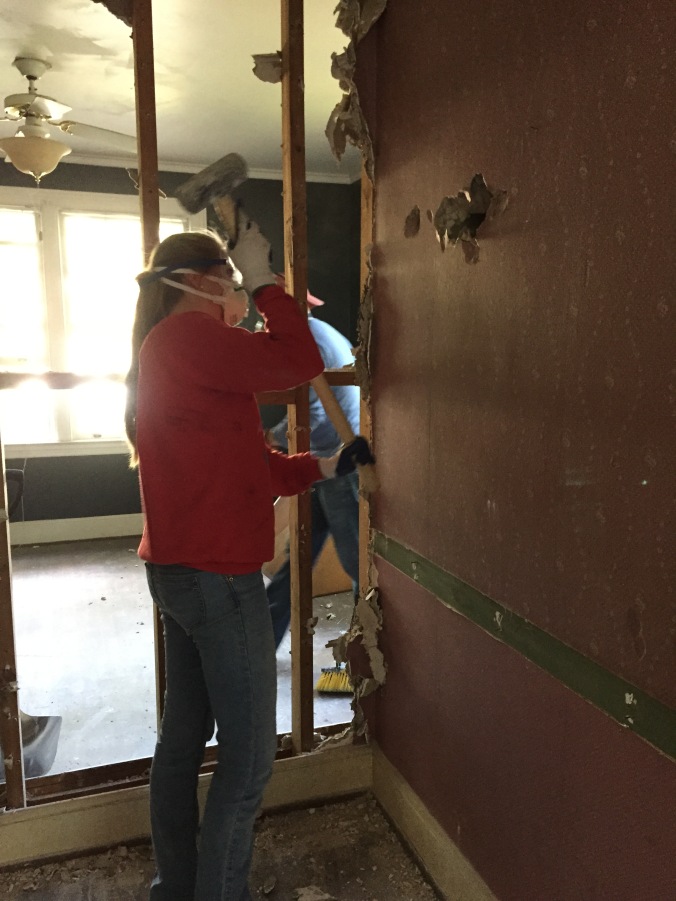 Real women swing sledgehammers (while kicking their leg up in an awkward demo dance move). 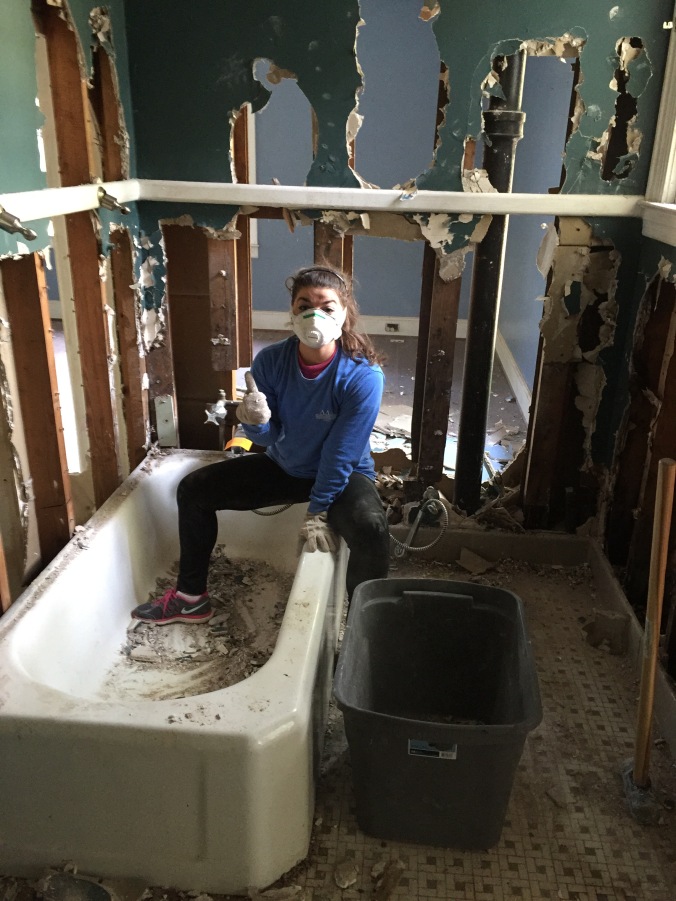 Taking a break in the bathtub.

Clean up in bedroom three! 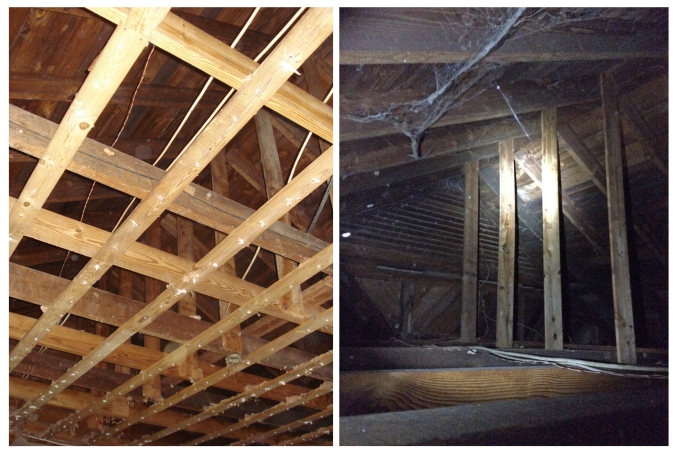 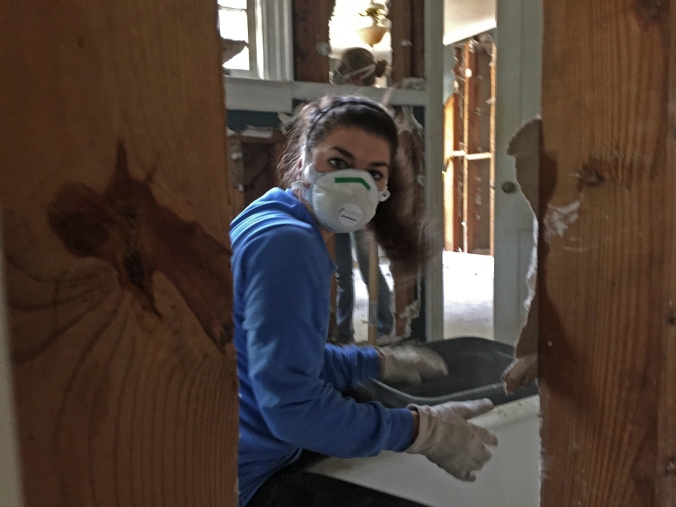 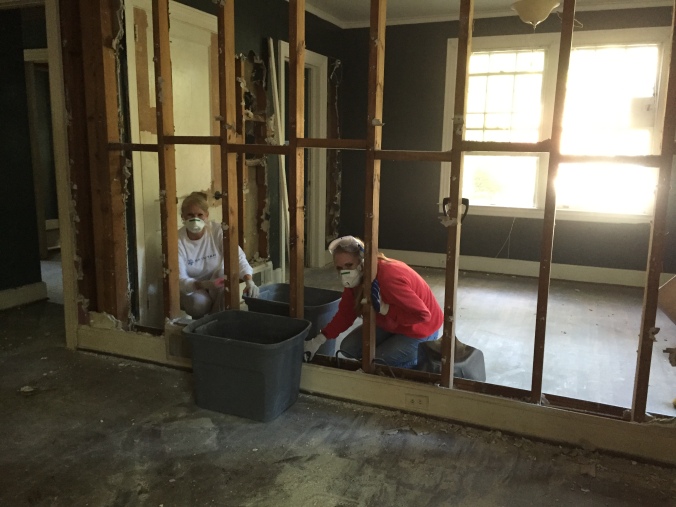 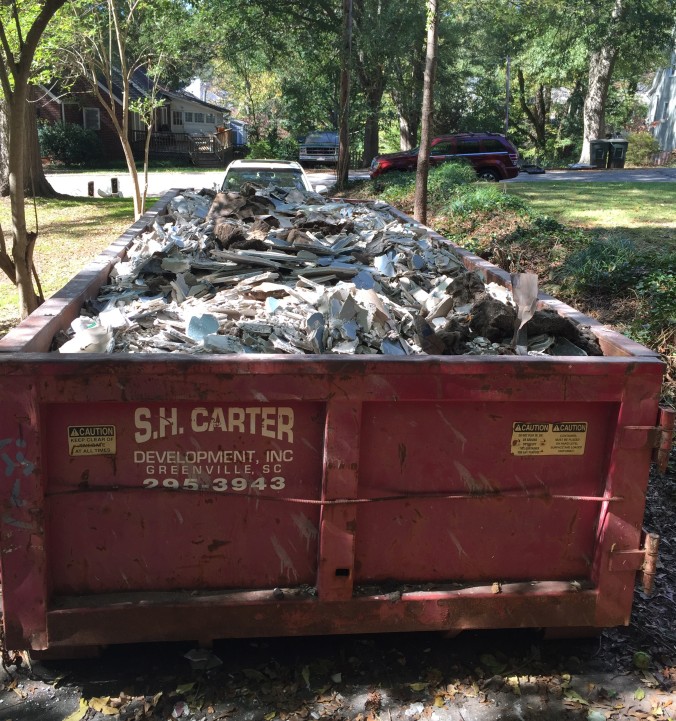 Whoa! No more plaster in the dining room.

The dust cloud…a.k.a. the reason we wore masks!

The Newtons — happy after a hard day of work!

Demo by the Digits:

All in all, it adds up to a greatly productive day.

The word is out—lots of Nest Neighbors are stopping by to peep at our progress.

Way before she was ours, the little Cape Cod on the corner was a constant topic of conversation in the Aberdeen ‘hood. So, naturally, now that we have made some obvious progress, curious neighbors are coming out of the woodwork. It’s wonderful!

Matthew and I were a little gun shy at first because for years the house was a neighborhood eyesore and many of our neighbors (understandably) wanted the house to be demolished by the city, but the response to our effort to redeem its reputation has been overwhelmingly positive. We’ve had high fives, pats on the back, (delicious!) cookie deliveries, and many welcoming faces stop by to say “we’re glad you’re here.” The very best of the well-wishes so far came one evening this week when I was sweeping the front steps… a young girl zipped by on her bicycle and yelled up to me, “you’re doing a great job!” Made. My. Day.

Thanks to each and every person who has stopped by to encourage us!

To everyone else, a few wise words from Thumper: 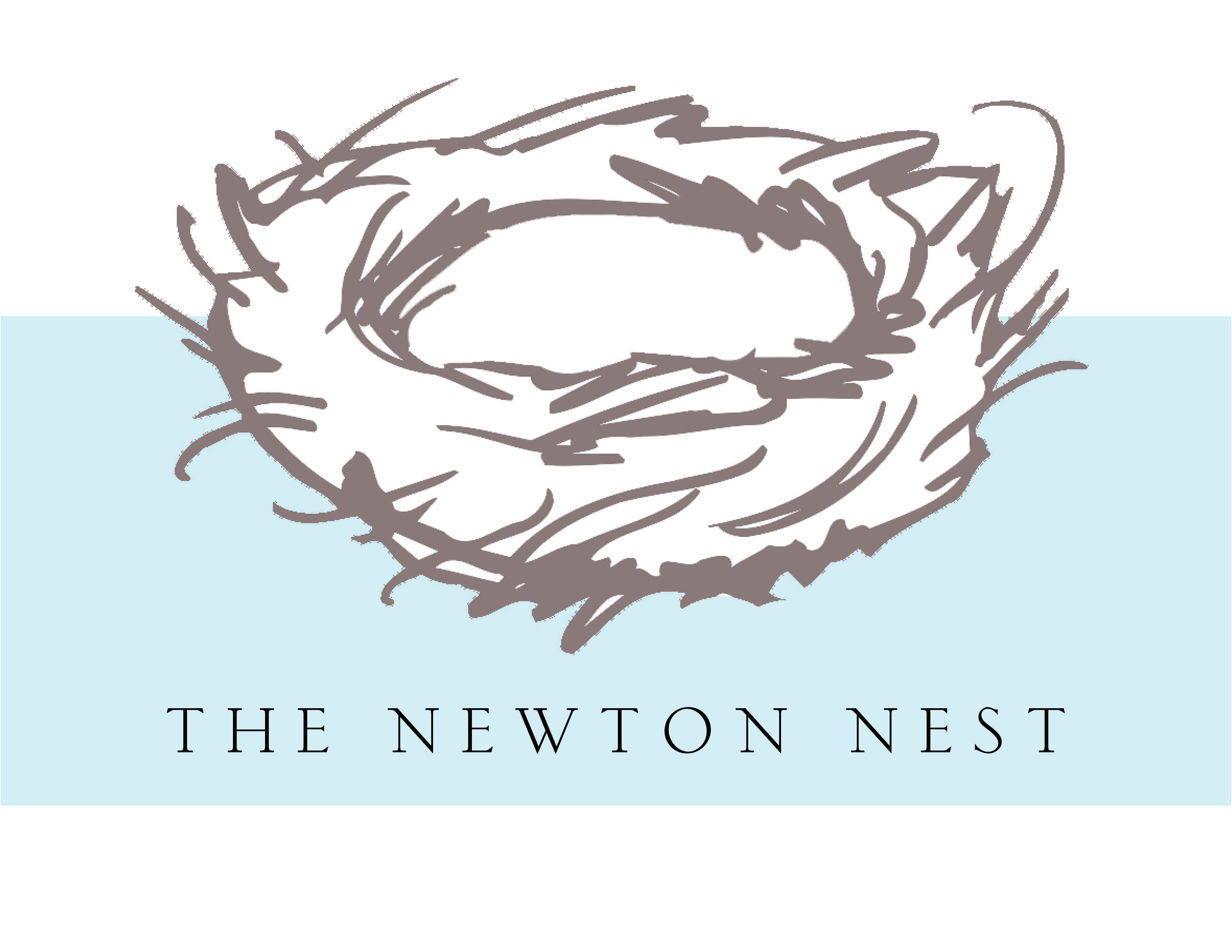 Welcome to The Newton Nest!

Lauren and Matthew Newton are two love birds (or Dodo birds?) taking on the project of a lifetime—renovating a 1940s Cape Cod into their dream home.